I grew up eating a classic bread, onion, celery, sage and apple stuffing.  I have learned to love cornbread stuffing since becoming gluten-free and changing the base of the stuffing seems to have opened the floodgates of experimentation.  I have been fickle about stuffings for the last few years.  I have been playing the field and experimenting with all kinds of flavours.

In the end though, I really crave the balance of sweet and savory from the stuffing of my childhood.  This is the most satisfying cornbread stuffing recipe that I have tried.   It embraces  buttery crusty deliciousness of cornbread.  It uses the simple, classic  savory combination of onion celery and sage that I crave.  Apples are not the best choice for a cornbread stuffing because the texture is too soggy.  The texture and intensity of dried cherries and/or dried plums work better.

I highly recommend making the cornbread recipe at this link for this stuffing.  It is a southern style cornbread, which means that it is dense and savory with a delicious crust.  This recipe will not work with a fluffy sweet Northern style cornbread.  The good news is that this cornbread recipe is really, really easy to make.  You might want to let it bake for an extra five minutes so that it is has a nice golden crust.

HERE ARE SOME OTHER IDEAS FOR THANKSGIVING…. 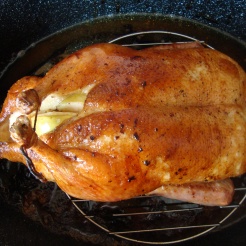