At this time of year,  I choose comfort over creativity.  I am really not all that interested in trying out new foods.  All I really want to do is cook the things that I traditionally cook at this time of year.  Here is an example:  For Thanksgiving I made three pies and, for the first time in YEARS, two of these pies were new recipes.  They were both LOVELY pies (top left and center bottom) and if I had made them at any other time of year I might have liked them…but the truth is I just missed my usual thanksgiving pies (pear sambuca and cranberry raisin).  The only one that I liked was the apple-rum raisin pie (top right), which I have made hundreds of times before. 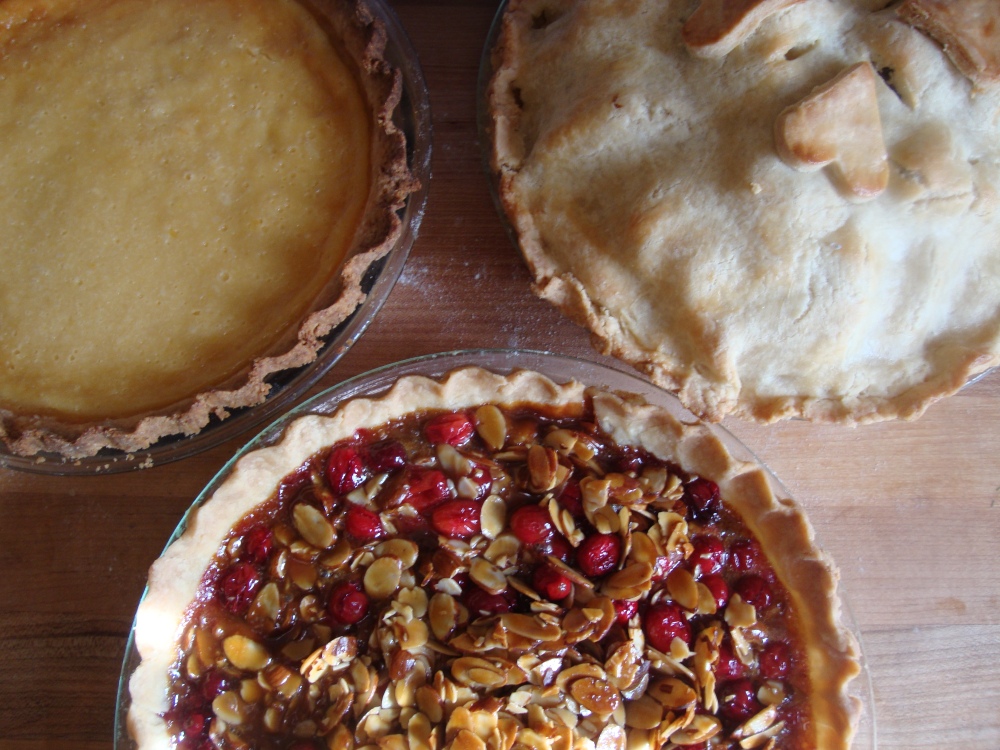 I am however, interested in learning how to make foods that I used to make before I gave up gluten.  I want to make the foods that I miss at this time of year…foods that I have been missing for years and year.  If my craving for good biscuits, almond croissant and chicken and dumplings was going to go away it would have done so already.  I need to do something about these hankerings already!   I have already found or made up good recipes for gluten-free tart and pie crusts, wedding cake, sticky toffee pudding, trifle, blackberry tea cake, pancakes, pizza, clafouti, and popovers.  My goal this winter is to figure out how to make Estonian apple cake (check!), empanadas (check!),  really good biscuit dough that could be used for cobblers and dumplings (this post), puff pastry and maybe even peirogi and ravioli.  If all goes well, I will comfortable and plump by the time spring rolls around and I feel adventurous again.

Okay, Getting on with it. Ladies and gentleman, I have finally found a gluten-free biscuit recipe that has met with my complete approval.  Those of you who have known me for a long time probably know that I used to make a lot of really good biscuits. I also used my biscuit dough to make fruit and tomato pies, cobblers and dumplings.  It was an all-purpose recipe that could be used to make anything more delicious.  After going gluten-free, I found a recipe for gluten-free biscuits that tasted pretty good if you added cheese, but the dough turned into a gluey mess when it came into contact with a stew in need of a cobbler toppling or a soup in need of dumplings.

A couple of things fell into place recently.  First of all, I bought a pound of high quality refined lard from Mosefund Farm, which has a stand at the New Amsterdam Market on Sundays.   I was very excited to find it because my grandfather used to bake delicious pie crusts with lard.  I would like to bake pie crusts like my grandfather’s, but there is no point doing that kind of thing with bad lard.  You have to render it yourself or find a reputable farmer to buy it from.

Then, about a week after I bought the lard I came across this AMAZING recipe for gluten-free buttermilk biscuits made with refined lard at the Art of Gluten Free Baking website.  Everything about this biscuit dough is right.  The bend of flours has a clean neutral flavour so that you taste the fat. In truth, I believe that they would taste just as good made with nice quality butter in place of the lard. They are the right amount of fluffy and the right amount of crunchy.  I put them on top of my wild mushroom cobbler for Thanksgiving and they they totally held their own.  I even made chicken and dumplings with this dough and the dumplings were fluffy and fatty and delicious!

At first, I tried the recipe initially with a slightly different blend of flours that I already had on hand, but I found that the recipe works best with the exact blend that the author suggests. Also, the flours that this recipe used are cheaper than many of the gluten-free flours.  Mochi flour can be purchased for a very good price in asian super markets and tapioca flour is sold in African markets as Fufu flour for a fraction of what it costs in a health food store…so YAY!  In the end the only thing that I adjusted in this recipe was the amount of salt.  I liked a little bit less.

I used to make my biscuits  by dropping them on to the sheet instead of rolling them out and cutting them.  They always turned out fluffier that way.  This recipe calls for rolling and cutting, but specifies that you should not use a glass but a sharp cookie cutter to cut out your biscuits since any pressure from a dull edge with compress the dough and make them less fluffy.  I have not tried these gluten-free biscuits in the drop style yet, but the advice about using a cutter instead of a glass produced lovely biscuits.   Now I just need a cookie cutter that isn’t heart-shaped!

3/4 tsp. kosher salt (Erin used a half tsp instead)

4 TBL  leaf lard or shortening, cold (or just use extra butter if you don’t use these)

Preheat the oven to 425 degrees.

In a mixing bowl, stir together the sifted flour, baking powder, baking soda, and salt. Add the butter and lard, and cut in with a pastry blender or your fingers until the fat resembles coarse, pea-size clumps. Stir in the buttermilk, taking care not to over-mix.

Turn the dough out onto a floured surface or Silpat, and shape into a cohesive mass. Roll the dough out with a tapioca flour-floured rolling pin until it reaches about 1” thick, then cut with a tapioca-floured biscuit cutter. It’s important that the cutter goes in an out of the dough with minimal squishage of dough. Be careful not to turn the cutter as you cut the dough–this will “seal” the edges together and prevent the biscuits from rising to their true potential. This minimal squishing of the edges is what helps the biscuits to rise and be fluffy:

Place the biscuits on a parchment-lined cookie sheet, and brush the tops with an egg yolk beaten with milk if you want to glaze them.

If you are using the dough to top a cobbler, Make sure that your stew is already warm and spread it into a baking dish.  Top the stew with the raw biscuits and glaze them.  Bake the cobbler  for 15 to 20 minutes. 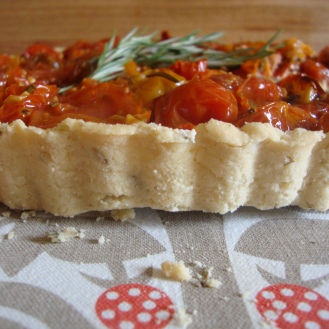 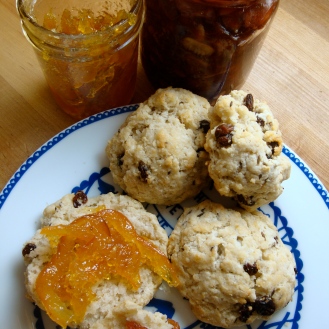