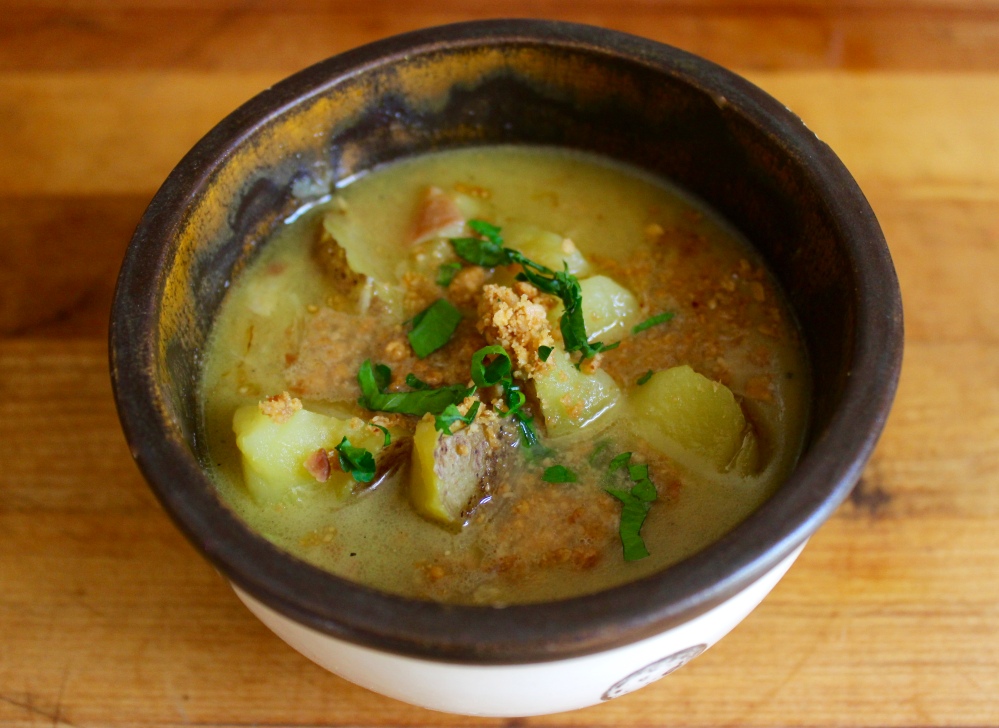 This simple, Andalusian style Potato soup has been a standard in my kitchen for many winters.  Is is one of the three most simple and deeply satisfying soups I’ve ever eaten.  The other two are Caldo Verde, the Portuguese concoction of kale, potatoes, sausage and water that magically makes perfect soup and Stracciatella a perfect combination of eggs, greens, good chicken stock (and garlic, if I’m making it).

This potato soup is good to eat late at night when you’ve been working a 12 hour day even though you’re fighting a cold.  It’s a good breakfast if you have a hangover.  You can carry it to work in a mason jar and reheat it in a microwave in the employee lounge.  You could absolutely serve it with good bread and wine and green salad to a small party of elegant friends.  I have not done that, but only because my winters are always smashed full of work.

If you cook any Spanish dishes, it is highly likely that you will already have the short list of ingredients needed for this soup lurking in your pantry, fridge and freezer.  If you live in NYC and are cuddled into your apartment during the snow storm (more of a wind storm than the predicted snow storm) right now, you might be able to make this soup without leaving the warmth of home. 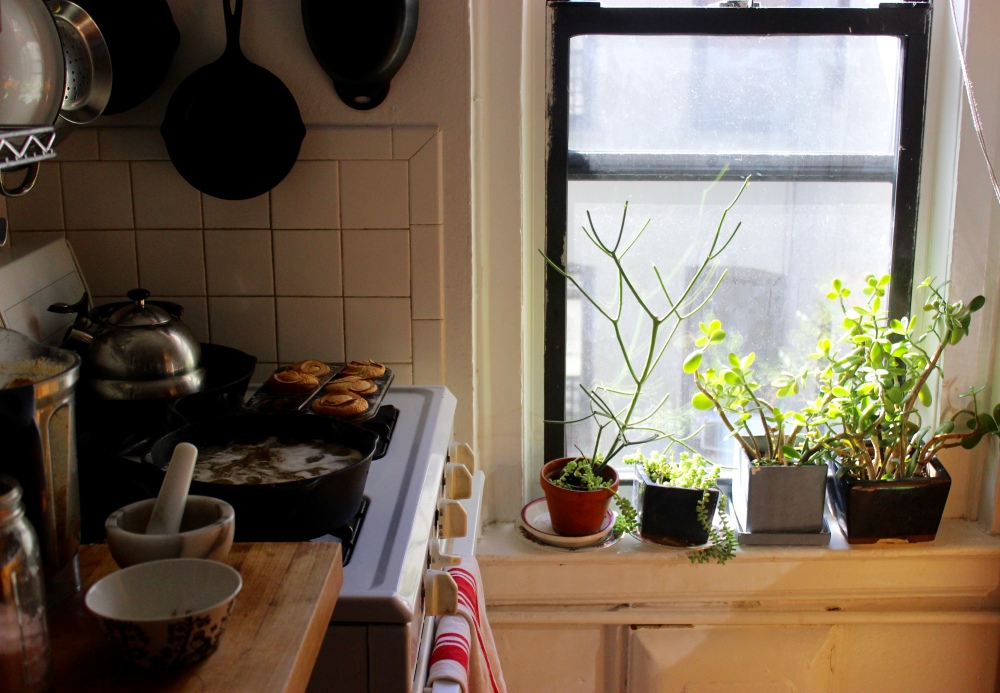 I have not shared this soup until now for two reasons.  First, I did not invent this soup.  I share lot’s of recipes that I did not invent, but I tinker around with them first.  Sometimes I end up with recipes that are so deeply adapted that I sort of qualify as my own, sometimes they are mildly tweaked to suit my tastes, and sometimes I just offer the same recipe with ideas for how to swap out certain ingredients and advice about when fussy directions should be followed or ignored.

I’m usually not a fan of recipes that insist that if you don’t have the exact authentic, artisanal ingredient list you may as well not bother.  This brings me to the second reason I have not shared this recipe until now.  I have mucked about with this soup for years and I can honestly say it is better if you make it with the exact ingredients suggested.  I’ve tried other root vegetables and varieties of potato, but the flavor and starch content of Yukon gold’s is best.  I’ve used weird experimental vegetable and bone stocks that I make from kitchen scraps, but the simple flavor and golden color of a good homemade chicken broth is much better.  I’ve skipped the Serrano ham and, although this certainly did not ruin the soup, the only reason to skip it is if you don’t eat pork.  I’ve used other kinds of vinegar for the final splash of acidity and, again, the soup wasn’t ruined but Sherry vinegar has by the far the best affinity for the almonds and saffron in the soup.  I do not buy aged Sherry vinegar (as this recipe suggest) because it’s too expensive. I’m sure it’s better, I’m just not about to start an expensive vinegar habit.

All of this is to say you can read the recipe here or go visit Food 52 which included this soup recipe in its excellent genius recipes series.  The only thing I’ve added are some nice photos and tiny comments about my preferences.  Either way, make this soup! 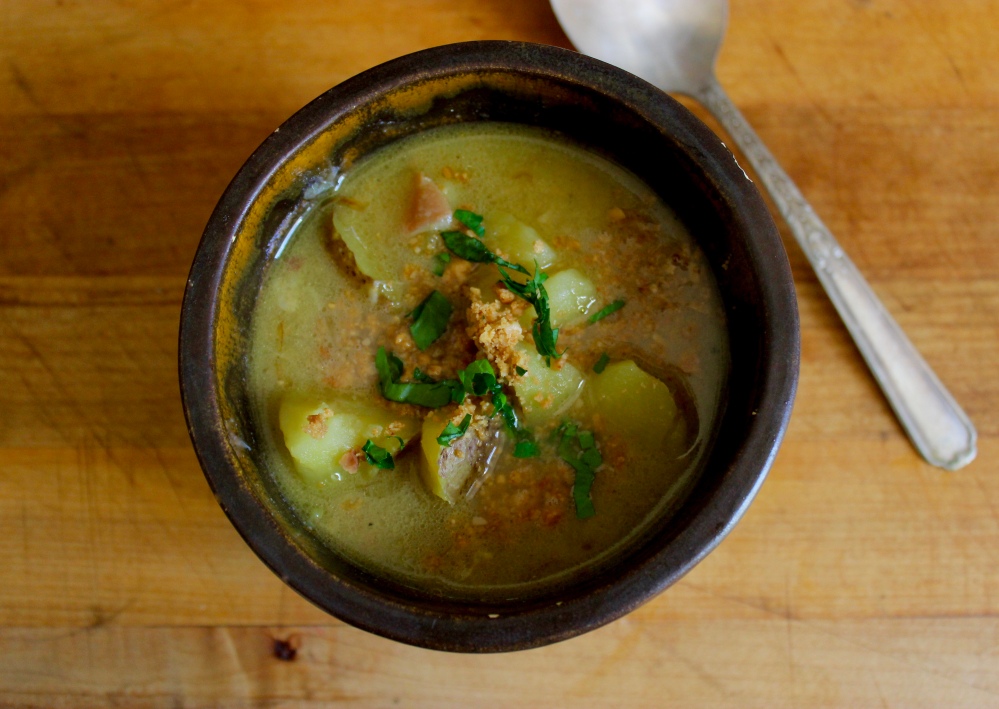 by Anya Von Bremen by way of Food 52 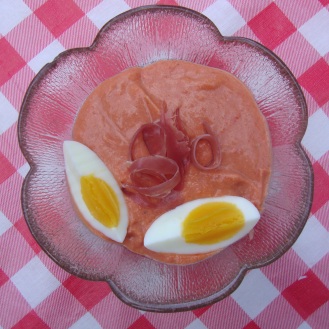 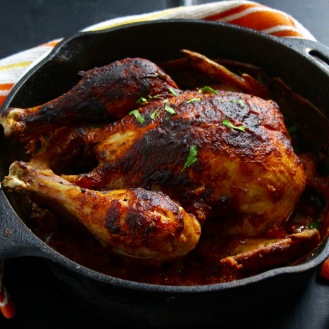 Stracciatella with Ramps and Nettles https://bigsislittledish.wordpress.com/2014/05/17/stracciatella-with-ramps-and-nettles-to-cure-seasonal-allergies/