When I was in the fourth grade, I found a recipe for succotash in the recipe section of the local newspaper.  It caught my fancy, and my mother agreed to help me make it.  Succotash is corn and lima bean stew but I am pretty sure that the newspaper recipe included ground meat of some kind.  I was always scheming to get more meat into my diet as a child (although I don’t think that I would want ground meat in my succotash now).  Succotash often has other ingredients thrown in, and I am of the opinion that it is a good idea to throw in whatever vegetables had a good season in your neck of the woods.  It is typically served as a Thanksgiving dish, but I prefer to make it in September, when corn and lima beans can still be had fresh.  I know that they both freeze pretty well, but they are still better fresh.  Also, I really like ripe tomatoes in my succotash and mid September is the big tomato moment!

My husband and I have just returned from visiting his family in Eastern Tennessee for a couple of weeks.   Chris’ mother knows that I like to cook, so she thoughtfully took me  to the small but lovely Saturday’s farmers market in Maryville.  Looking across the tables of lovely local tomatoes, corn, peppers, onions and okra I thought, “All we need is lima beans and we can make succotash!” 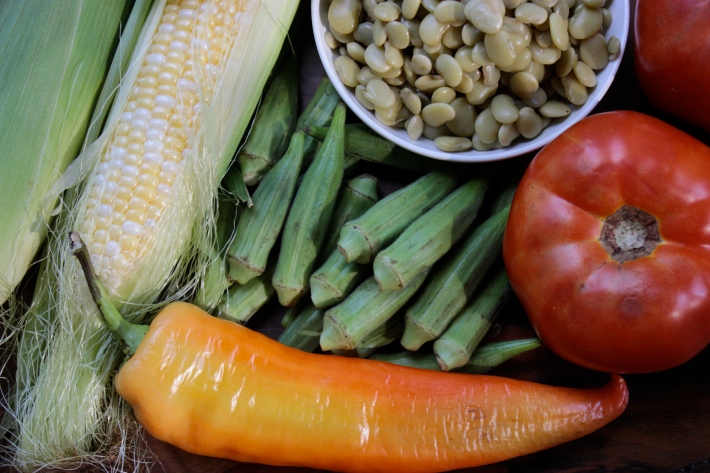 Chris’ mother also took me to her regular market, a small grocery called Horn of Plenty that carries wonderful local fruit, vegetables, dairy, jams and bacon.  They had shelled lima beans!  They were labeled butter beans, but that is a cuter name for the same thing.  I should pause here to say that although I like fresh lima beans better than frozen, dried or canned lima beans, I am not actually a big fan of shucking them.  It is arduous work.   The idea that a person could just go the local market and pick up a bag of fresh, shucked lima beans….well the luxury of it boggles the mind and demands that you buy said lima beans and make succotash!

In fact, I made three batches of succotash in less than two weeks.  I froze one batch, so that we could take it with us camping.  I’d do that again!  The frozen succotash was a good ice pack for the other food that we wanted to keep cold.  I packed it at 6AM and by 6PM it was totally thawed and ready to be warmed in a pot over our camp stove.  Oh!  Did I mention that local watermelons were in season?  We also packed a frozen batch of this Chilled Watermelon, Tomato and Almond Soup which I keep talking about from  Small Plates and Sweet Treats by Aran Goyoaga.  That was also packed at 6AM and was perfectly thawed and ready to be slurped down cold after a hike in the Tennessee heat at 3PM.   Just in case you are feeling overwhelmed by the culinary glamour of our camping trip, know that the next night we ate those ready-made Indian meals that you boil inside their packet to avoid making dishes, so it all evened out in the end.

The other batches, we ate at Chris’ parent’s house with  skillet cornbread.  Chris’ mother knows a folk song or old tune for any occasion.  While we cooked we hummed this one…. Wait, I don’t know how to imbed video so, you’ll have to follow the links.  Here are our friends The Wiyos.  And here are some friends of friends The Carolina Chocolate Drops. 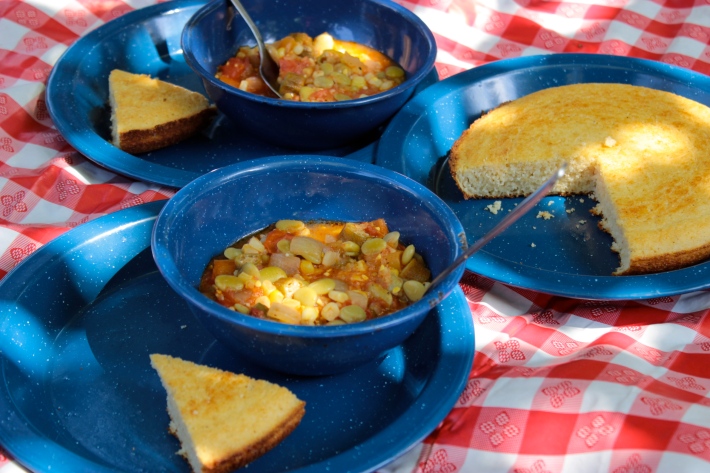 So, here is the succotash that I made, but this is obviously a recipe that thrives on improvisation and flexibility.  Make it with the beans that are good where you live. Make it with whatever vegetables you have lots of.  I really, really like bacon grease in my succotash, but it is not mandatory.  If I am not mistaken, it is not uncommon to add milk or cream to succotash (especially if you do not have tomatoes).   If you live in an alternate luxurious universe (Like Eastern Tennessee) where one can buy fresh, shucked lima beans do so!  But, I need to offer you one caution about them.  Cook them as soon as you get them home because they do not keep shucked and raw, not even for a couple of days.  If you live in NYC and have some time on your hands fresh lima’s in their pods are available as we speak at the Union Square Greenmarket.  In fact all of these ingredients are there! 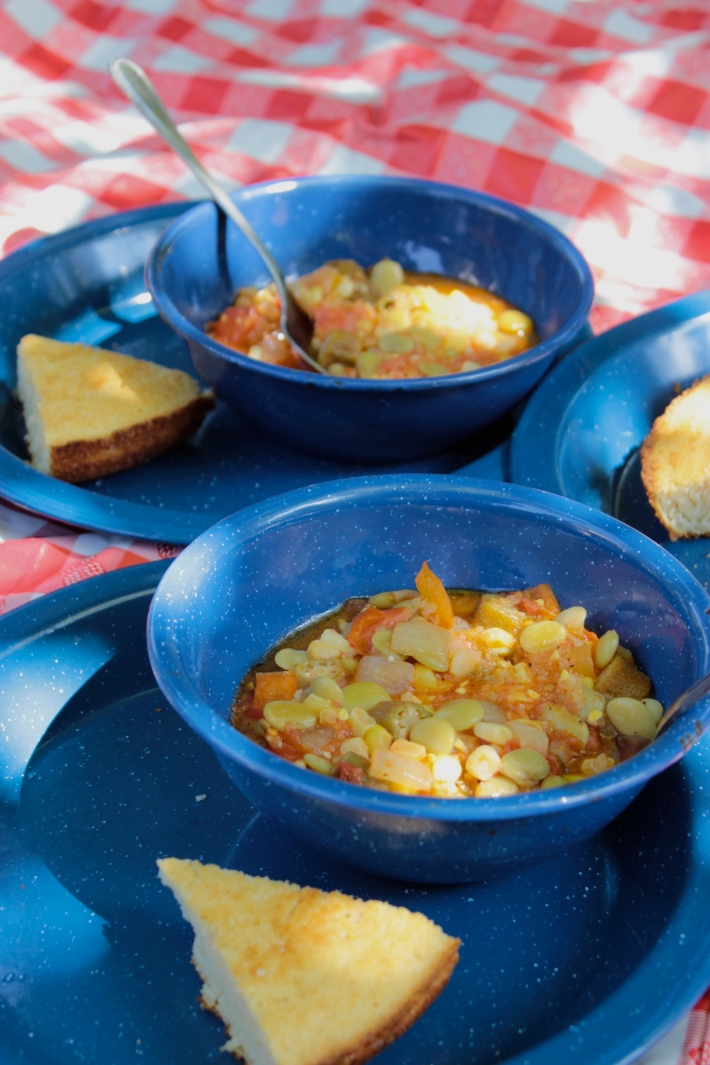