I have been trying to create a coconut, lemon and blueberry dessert for a while now.  This may seem like an odd combination of flavours since blueberries and coconut do not grow in the same climate, but it is in fact delicious.  Last summer, I made a chia seed pudding with coconut milk and topped it with blueberries for no other reason than that was the nut milk and fruit I happened to have on hand and I have been obsessed ever since.

Early this summer I had just made a coconut blueberry muffin that was good, except that I am just not really a muffin person, when Allison at Spontaneous Tomato posted a raspberry chocolate tart with a coconut crust.  Go ahead and look at it,  I know you want to.  She adapted it from an Alice Medrich recipe that I had a vague memory reading about on another food blog that I like, Lottie and Doof.  So, clearly some of my favourite on-line cooks like this Alice Medrich person,and if you are a person who eats gluten you should probably run out and buy one of her cookbooks.  I cannot eat gluten, but I was pretty sure that I could adapt this crust to be gluten-free and use it for a blueberry lemon tart.

I tried a few different combinations of gluten-free  flours and finally switched out the butter for coconut oil.  It pains me to admit that butter does not have the same magical relationship to rice flours and starches made from tubers as it does to wheat.  Coconut oil made the crust crispy (not greasy).  It also made this tart vegan, so now my mom can make it.  Hi mom!

I also increased the quantity of the dough because I have a very large tart tin.  I swear it looked like the right size in the store…and that is what I get for buying baking supplies from an industrial baking supply store.  I would use this amount even for a regular pie dish though.  Gluten-free dough is less likely to bind together and make a perfect crack free crust, so making it a bit thicker is a good idea.  And let’s face it, the extra bit of delicious coconut crust won’t spoil anyone’s fun!

adapted from Alice Medrich, via Spontaneous Tomato and Lottie and Doof

Blueberry Slump with Hazelnut Ricotta Dumplings (gluten-free or not) https://bigsislittledish.wordpress.com/2012/08/11/blueberry-slump-with-hazelnut-ricotta-dumplings-gluten-free-or-not/ 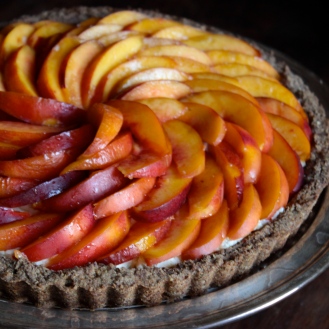 Fresh Nectarine Tart with a Hazelnut Crust and a Rose Glaze https://bigsislittledish.wordpress.com/2013/08/15/fresh-nectarine-tart-with-a-hazelnut-crust-and-rose-glaze/ 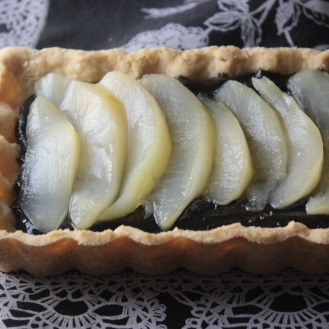