I spent the second half of my childhood on the island of Maui.  First in the old whaling town and tourist Mecca of Lahaina and later in the scorching hot seaside sprawl of Kihei.  When my parents bought their house in Kihei, my mother was eager to start a garden.  She had grown up on a farm herself and had spent her gypsy-like young adulthood pining not so much for home ownership as for the kind of permanence that allows one to have a vegetable garden.

Imagine my mother’s horror, when she discovered that the sun in Kihei was so hot that it could (and would) cook her tomatoes right on the vine.  Kihei was home armies of ants that could (an would) devour her strawberries the second they came ripe.  Kihei was built upon what had once been a marsh.  You would never know it except that the whole town became a marsh once again once a year during annual rain storm.  The only other clue would be if you tried to plant 12 banana trees which flourished until one fateful night they reached the brackish water table and died instantly.  Welcome to home ownership in Paradise Glenda.  Kihei was paradise for my dad who valued sunshine and access to the ocean above all else in life, but it was not exactly the right town for my sweet mama.

After living in Kihei for 22 years, my mother finally moved 3,000 miles up the volcano to an area called Kula.  On most days, Kula sits just below cloud level.  It is lush and green and cool and is home to many thriving farms that grow strawberries, vegetables of all kinds and lavender.

My husband and I are on Maui visiting my mama right now, and we sent the first five days helping her with her garden.  Okay in truth, my husband did all of the helping with the yard and I cooked (big surprise).  The yard was mowed and weeded, worm compost was harvested and turned into the raised beds, baby lettuces, greens and tomatoes were planted.  Since my mother is just putting her spring garden in, we have been going to lots of farmers markets and groceries that carry local produce so that I can buy ingredients to cook them.  When I lived on Maui, most of the vegetables were flown in from California.  Now you can buy the most amazing local produce.  It is truly stunning. 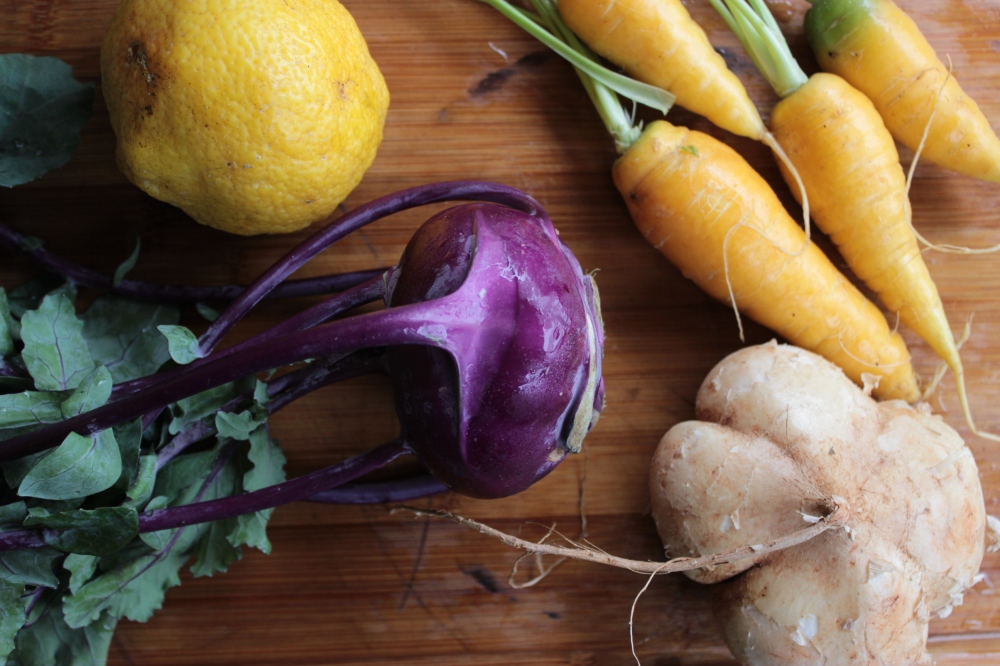 I made this slaw from Maui grown vegetables, but all of the ingredients are more or less available at this time of year in colder climates as well.   The carrots, kohlrabi and jicama are all much smaller than the ones I get in New York.  The lemon is a tiny bit bigger than ones on the mainland and that lumpy, ugly exterior indicates that it is the awesome, sweet, juicy variety that was common here even in my childhood.  I have fond memories of hiking in the aggressive sun and coming across a giant old lemon tree heavy with these ugly, sweet, refreshing gifts from heaven.  I was particularly impressed with the locally grown jicama though (the beige tuber down right in the photo).   The jicama that I can get in New York are five or six times as large as this one, making their purchase a major commitment to jicama consumption.  Also, the ones that I get at home have very thick skins, usually spotted with mildew that must be peeled off, discarded and banished from your memory before you can bring yourself to eat the goodness inside.  This is what jicama is supposed to look like!  Who knew?!?  The kohlrabi I get on the mainland is usually green, not purple.  This one was green too, once I peeled it.

This slaw is very easy and delicious.  Serve it with fresh fish if you can get!  We had Mahi Mahi (go ahead and read that with a smug tone of voice). Nanner Nanner Boo Boo.

CREAMY JICAMA, KOHLRABI AND CARROT SLAW WITH GARLIC AND LEMON