My recent trip to British Columbia was all about Salmon.  I ate a lot of Salmon. We did not eat salmon EVERY day…but on the days that we were not eating salmon, we were talking about eating salmon.   On Gabriola Island, we were eating a lot of pink salmon, which seemed to be the most willing to be caught by our fisherman friends.  I consider myself a salmon snob because I am mistrustful of the salmon offerings on the east coast.  But I found out that many local BC people are so spoiled for good salmon that they don’t like to eat pink salmon (they call them slimy humpies!).  These people prefer sockeye salmon.  I think both are delicious!

My mother’s friend Keith, fisherman, boat builder , grower of figs and expert food forager extraordinaire, served us pink salmon that he had caught himself.  He has an outside preparation area for processing his fresh caught oysters and fish. 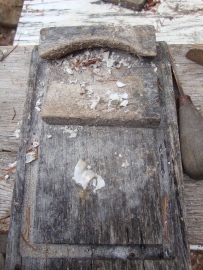 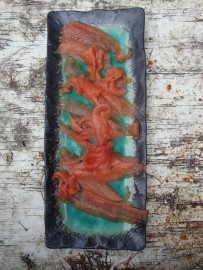 Left- Oyster shucking station.  Middle- Prepping the salmon.  Right- After filleting the fish, Keith cut the last bits off the bones for sashimi.  We did the salmon fillets on the grill in foil packets with mustard and fresh green fennel seeds.  This kind of weedy fennel is growing wild all over the Pacific Northwest coast.  I saw an entire vacant lot full of it in Seattle on my way home!

My mother’s neighbor gave us some more pink salmon, which I made into a salmon, potato and corn bisque.  I regretted blending it though.  Someday I will make it again as a salmon, potato corn chowder instead.  I also had fried salmon, grilled salmon and smoked salmon.  But wait there’s more…

In Vancouver, I had dinner with my sister, Silvi, and her mama, Ieva, who lovingly prepared salmon on  Silvi’s request.  I was on the phone with Ieva making the dinner plans and Silvi gave me a serious, plaintive look and said “I want a salmon”.  Silvi’s look told me, “Don’t mess with the order of my existence by planning some weird dinner.  Late summer time + dinner with my mom = Salmon”.

Silvi asked Ieva if we could put her salmon recipe on the blog and she replied that it was too simple.  Silvi pointed out that it may be simple, but that she herself did not know how to do it.  That is what happens when your family has a salmon cooking expert…no one else bothers to learn how to make it!!!

We  served the salmon with a wonderful green salad with beets, radishes and tomatoes from the local farmer’s market.  We also made (what I had meant to be) a ground cherry and almond gazpacho.  The flavour was so intense though, that it would really make a better sauce…a sauce for salmon!

Physalis Peruviana go by many different names.   I have seen them labeled as  ground cherries (in Maine), Cape Gooseberries (in NYC), Poha  (in Hawaii),  Goldenberries (in Vancouver) something I couldn’t read in Hindi (In India).  Other pretty aliases include Aztec Berries. Peruvian Cherry and Pok Pok.  In other words, this fruit gets around.   They are about the size of a marble and are in a husk (like a tomatillo), but they are often more orange than green and they are as sweet and tangy as a tomatillo is sour.  I was just in Maine, where I learned that ground cherries had an excellent crop this year.  Here on the East coast, the variety is greener and less sweet than the ones pictured here.  I actually prefer the  flavour of the little green ones that we get in Maine and NYC, but that may just be due to the fact that they don’t really ever make it far from where they are grown here.  You kind of have to catch them at the farmer’s market or have a gardening friend who has planted them.  The orange ones are often imported from South America and they are clearly bred for maximum sugar.  Whichever variety you can get your hands on, this sauce is sweet, tangy and rich.